What's Hot In The Literary World.....

on January 11, 2018
Check Out Hardcore Author
Patricia A. Saunders

Self Published Author, Patricia A. Saunders was born and raised in Connecticut before relocating to the San Francisco Bay Area nearly 24 years ago. She received her Master’s in Management from the University of Phoenix in 2011. After the passing of her mother who had Alzheimer’s, Patricia decided that all the words that she kept to herself were to be released. 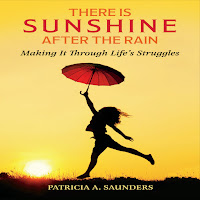 Saunders has released her fifth book an autobiography memoir infused with poetry (December 2017)  with BookBaby Publishing called There Is Sunshine After The Rain: Making It Through Life’s Struggles. The book will take the reader on a journey of a young child influences that shape her decisions as an adult. It is a must read that covers being raped multiple times,  a family that protects her,  how she wanted to die after the passing of her mother, and the people who would not give up on her!
Her work has been featured on a Coast to Coast Book Tour at the Los Angeles Times Festival of Books, Toronto Word On The Street, Sacram